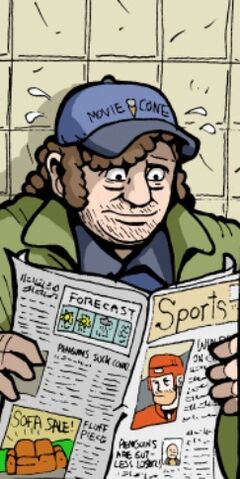 Mongo is a sanitation worker, first introduced as an overweight ice cream server at Movie Cone.

Mongo is a loner with no close friends, but a desire for some. Notably, he has the ability to see people (and possibly their living spaces) as they are on level deeper than the merely physical. He has been angry with himself for not taking greater action when he sees others mistreated.

Despite poor self esteem and eating habits, Mongo is possibly on the verge of a self-confidence breakthrough. Perhaps he always will be.

Mongo's first appearance was in Subnormality #75; he was named there too.

Community content is available under CC-BY-SA unless otherwise noted.
Advertisement